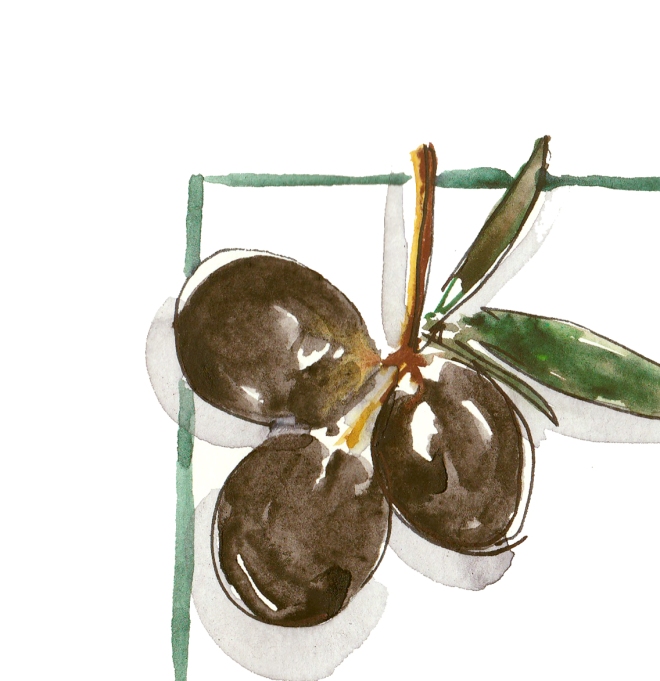 One of the oldest trees to be cultivated; at least 6000 years ago, the olive is a fruit that is popular worldwide and is also revered in most Mediterranean cultures.  By 3,000 BC, it was being grown in Crete and spread to Southern Europe and Africa through the Phoenicians; spread along the fertile crescent which includes some areas of Iraq, Lebanon, Syria, Cyprus, Jordan, Israel, Palestine, Egypt and fringes of Turkey and Iran.

Greek Mythology : How The Olive Was Created

The creation of the olive tree has been described in Greek mythology as a result of a competition between the goddess of wisdom; Athena and the God of the sea; Poseidon. The citizens of this new, yet-to-be-named city were to be bestowed with a divine gift from either of the gods. So, the next time you decide to recycle gifts or gift ugly casseroles and cutlery sets to people, remember you’re never going to have an entire city named after you. Coming back to the story, Poseidon went first and struck a rock with his trident (picture a scene from Disney’s Little Mermaid), sending a spring of water gushing forth. His gift was sea water that would sustain them. Athena went next and struck a rock with a spear, producing THE OLIVE TREE. (dramatic music)

The people chose Athena’s gift and the city of Athens was named after her. But Poseidon got all the movie offers. Hollywood guy and all that.

The Ancient Olympics originated in Greece and honored Zeus, the god of sky and thunder. They were first held in 776 BC and representatives from various city states traveled to participate in the athletic competitions.

In the ancient Olympic games, the winner was awarded an olive wreath that was considered sacred. An. Olive. Wreath. That’s it.

And people wanted the wreath. Here’s a lesson for you- there’s a taker for everything in the world. Absolutely everything. Except ugly casseroles and cutlery sets. (God, why do you do this ALL the time?)

Anyway, after the Romans occupied Greece, the Olympics were still held every four years except during the rule of Theodosius I who put an end to the games to impose Christianity as the state religion in Rome. 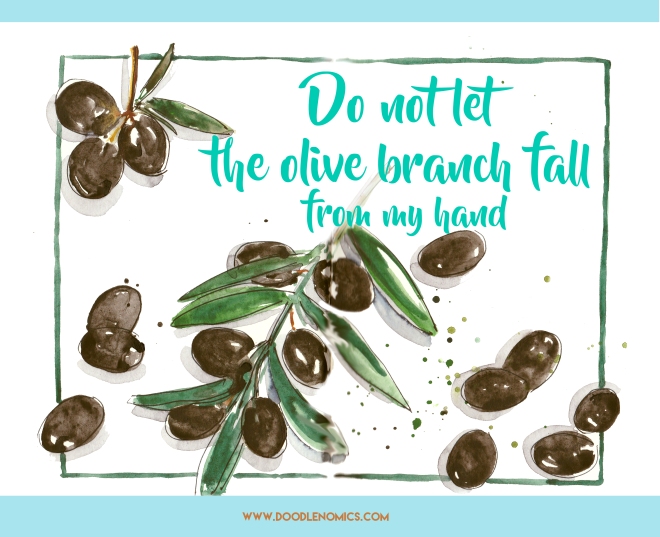 Biblical Story : Noah and The Flood

The metaphorical phrase ‘offering an olive branch’ meaning to make peace, comes to  us from the biblical story of Noah and the flood in which God decides to punish mankind for their wickedness. He instructs Noah to build an ark in preparation for a flood that would destroy everything. He also instructs him to have two of each living creature; male and female, seven pairs of all the clean animals, along with food for the animals and his family.

After this was done, rain fell on the earth for a period of forty days and nights. The waters flooded the earth for a hundred and fifty days, and every living thing on the face of the earth was wiped out.

Gradually, the ark came to rest on the mountains of Ararat. Noah and his family waited for almost eight more months while the earth dried out. After the great flood, Noah sent out a dove to see if the waters had subsided. The dove returned with a fresh olive leaf in its beak and since then the dove became a symbol of peace. 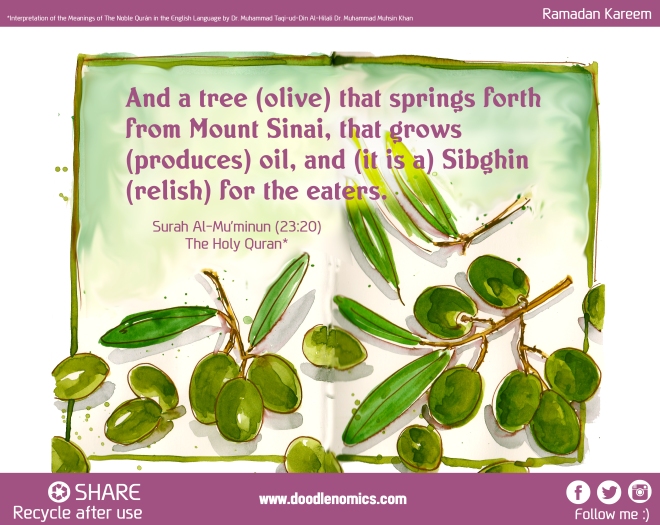 The olive has been mentioned a number of times in the Quran and the sayings of the Prophet Muhammed. They are considered a “blessed” fruit and a hadith (Sunan at-Tirmidhi, 1851) says:

Eat the oil and use it on your hair and skin, for it comes from a blessed tree.

“And He it is who causes gardens to grow, [both] trellised and untrellised, and palm trees and crops of different [kinds of] food and olives and pomegranates, similar and dissimilar. Eat of [each of] its fruit when it yields and give its due [zakah] on the day of its harvest. And be not excessive. Indeed, He does not like those who commit excess.”[Surah al-Anaam, 6:141]

“And a tree (olive) that springs forth from Mount Sinai, that grows oil, and (it is a) relish for the eaters.” [Surah al-Muminoon 23:20]

In the 1974 speech made by Yasser Arafat to the UN General Assembly in New York, he concluded by referring to the metaphor of the olive branch, saying:

From being called ‘liquid gold’by Homer in the Iliad and Odyssey, to being Popeye the sailor’s girlfriend… Olive has found a place in most cuisines the world over and it’s popularity in various forms, continues to grow.