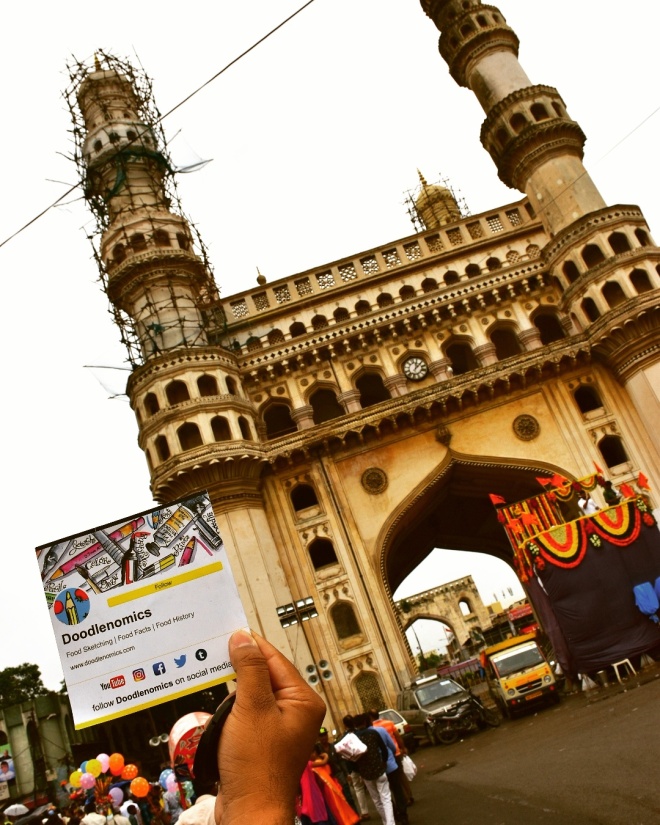 So here’s a quick recap of the fun things I’ve been doing in Hyderabad. I carried my art supplies this trip too and began sketching in the aircraft. This was a GoAir flight from Jaipur to Hyderabad which was about 2 hours long and I was left with a backache at the end of it because the seats weren’t comfortable. 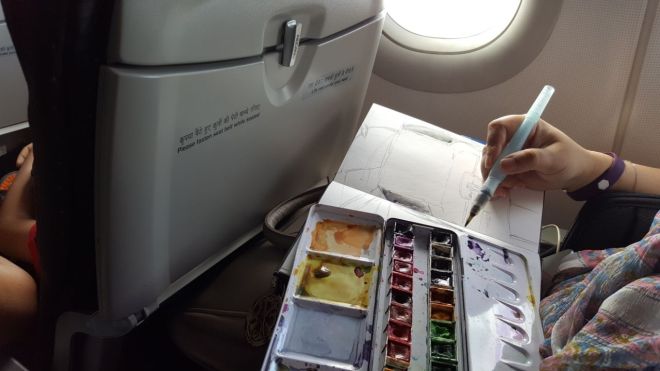 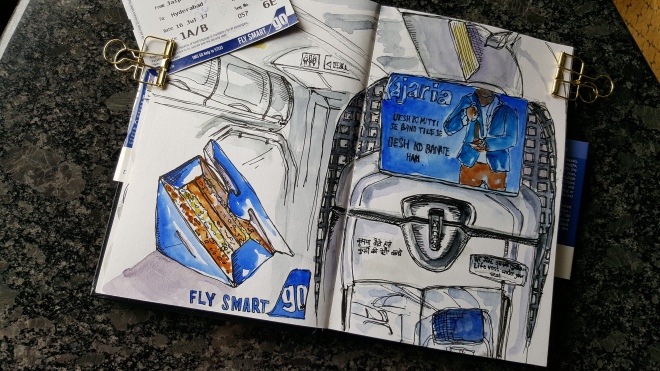 The weather of Hyderabad is incredible- cool and breezy. It began raining and that was perfect… for a short 10 minutes maybe. It has been raining like crazy here for the past few days. Yesterday was especially difficult because the rains hadn’t stopped for a minute and that made going around difficult. Very difficult.

We got out to have a look around the Husain Sagar Lake and met a bunch of girls thrilled to go shopping on a splendid afternoon. They were our first tour guides to the city and told us about the special Sunday antiques market, which is popular for some vintage finds, odd quirks and knick-knacks. We also learned of legendary cafes around the city and when asked where to get the best biryani, I was told in unison “Hotel Shadab, Shah Ghouse Restaurant and Paradise Restaurant”.

Walking away, realizing we now had to get to Charminar, we hired an autorickshaw (very sweetly called ‘aatu’ by some locals) and began chatting with the driver, who again, was instrumental in the formation of our daily schedule here in Hyderabad and was precise in his tips. His name was Mohammed Ahmed and he took us around the Charminar area on our first day in Hyderabad. Speaking of the museum, he added, “Yahaan kay sab itemaa bhot khadeema” (I cannot translate this line because it isn’t the meaning or instruction in it that is important. It’s his manner of speech that was so pleasing to the ear). “Shaadi Kay caardaan miltay yahaan”, he said pointing towards some area while I was busy writing down things he said.

Mohammed dropped us straight to  Hotel Shadab. Yes, we landed in Hyderabad and darted towards Hotel Shadab. This was something… It was a Sunday and Bonalu celebrations were on (holidays) so the place was flooded with people and there was a queue of hungry biryani-wanting people. Me included. But again, as charming as this beautiful city is, even the queue here wasn’t threatening or unending. People were lightly dispersed around the… ok, no, there can never be anything rhythmic about waiting but let me tell you about the next thing that happened.

Since tables were first allotted to 4 or more people so the waiting crowd could quickly be reduced, we decided to share a table together with two others who also believed the wait would never end.

This was our first meal in Hyderabad. With strangers. A biryani and Chicken Majestic later, they were friends and we had exchanged numbers. Turns out, biryani is salvation. If I ever make a political party, I shall propose a plate of biryani to be the symbol. It is stronger and more delicious when compared to the olive branch.

Here’s Syed Mehraj and Asma Parveen who were delightful company and spoke about everything one could think of- yes, including one of my favorite topics- cosmetic surgeries gone wrong. Hotel Shadab was the perfect initiation into Hyderabad and though we did go by the recommendation of the kind person serving us, I would say stick to more traditional dishes if you really are here for a slice of Hyderabad. I know, this sounds like silly advice but very often, the list of dishes that appear on a menu, overwhelms me and I suddenly order a roast chicken instead of a biryani. Happens to me (a lot). Also, congratulations Syed and Asma on your engagement. Wish you a world of happiness!

After the appetizing meal, we left for the market area, walked around a bit and came across a shop called Ahmedi Confectioners which is a 91 years sweet old sweet shop around the Charminar area. They sell scrumptious namkeen too, like chowda, a special called ‘Navratan Chiwda’ or ‘NRC’, Kaju Pakodi and a variety of delicious mithais and biscuits. You should definitely try the Jauzi Halwa while you’re there. The shop is managed by a father and son team who are happy to inform you of the city, it’s food habits and are ever-smiling. 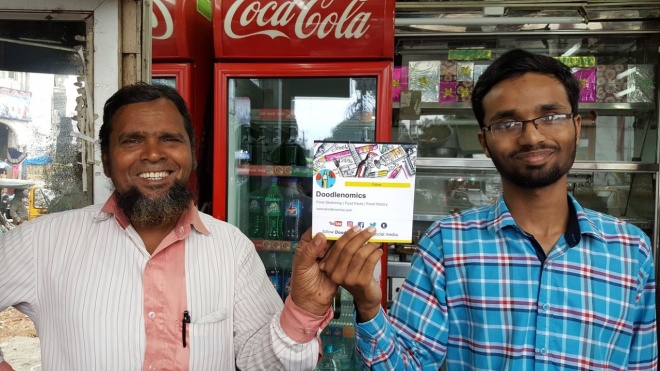 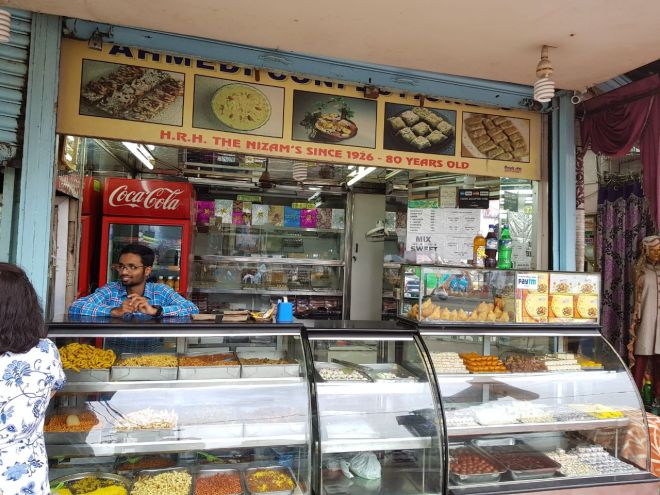 Walking around a bit more, we saw some interesting visual merchandising, sign boards and lots of …Hyderabadi swag boltay? 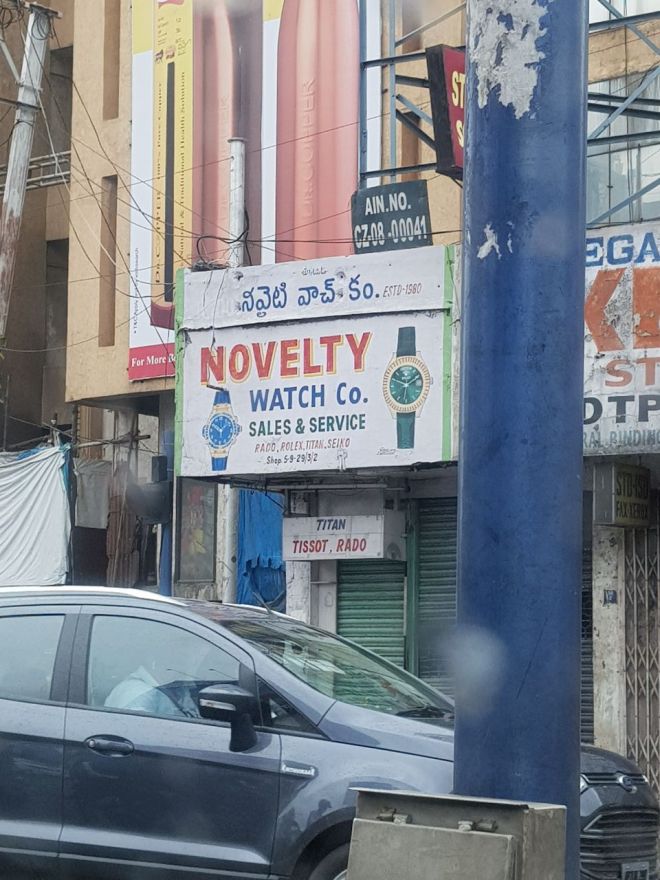 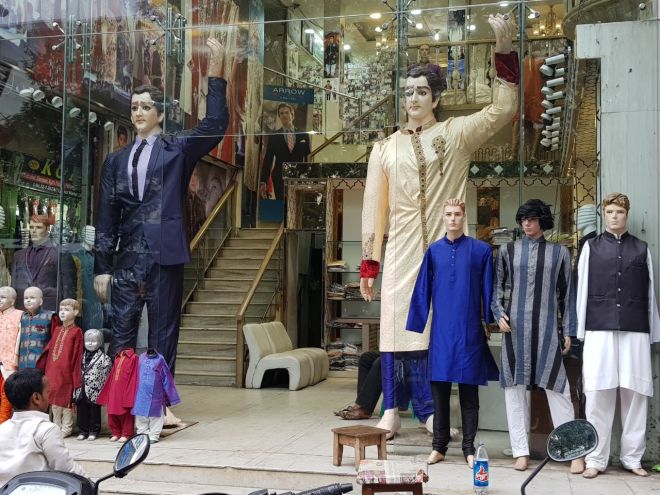 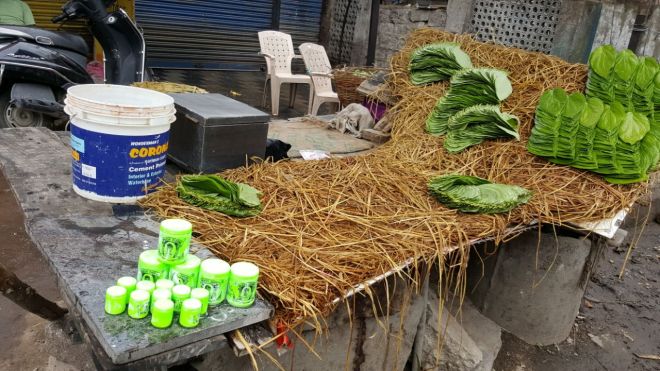