After Hyderabad, we headed to Goa. At the airport, we had yet another Hyderabadi biryani as a farewell. Bad decision. The biryani was Andhra-style (hot), masala biryani. I couldn’t finish my plate, more like I didn’t want to, fearing episodes of stomach-gone-bad at the airport (which actually did happen, but much later during our trip). 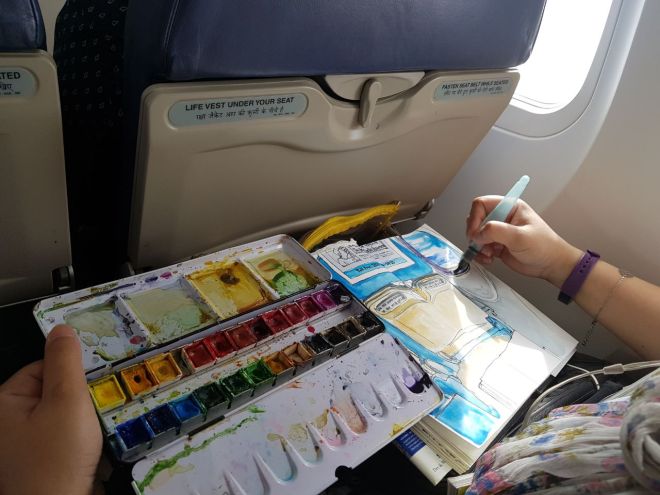 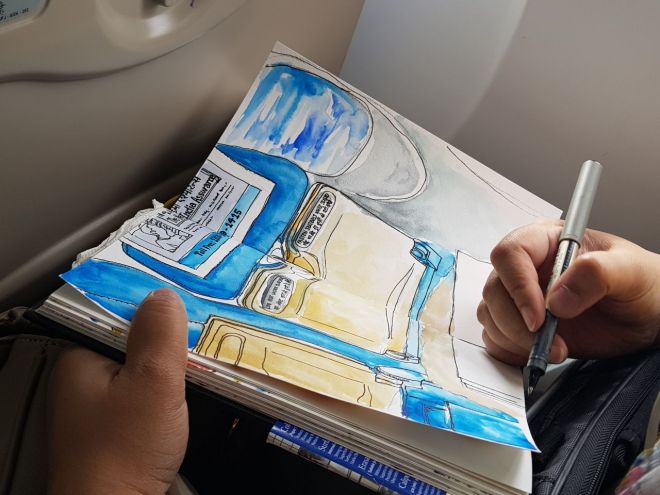 We took a Spice jet flight from Hyderabad to Goa. The aircraft was smaller than usual with just two seats on either side. The flight was of a short duration, 1 hour 20 minutes and I got busy sketching. Our plan was to stay in Panaji and you’ll read more about it in the next few minutes…

Reaching Goa, we had a welcome drink of Kokum juice which was refreshing, to say the least. I had never tasted Kokum and quite liked what I was drinking- sour and mildly sweet. Chilled. I imagined an invisible camera filming me, the colors of Goa super bright and very clean, crisp edges (Yes, things in my mind are often this precise, and I was thinking something very Julia Roberts-Eat-Pray-Love style) and maybe in that moment, I was sketching across Goa with my pet llama. Again, in my mind, of course.

Leaving our luggage at the hotel ,  we walked around a bit and saw a shop called “Marcou Artifacts” which had a lot of Portuguese style ceramic curios and knick-knacks. Some of you might think ‘clutter’ when you see such shops but is a cashew apple shaped palm-sized tray not utilitarian enough? (Stop being so picky. God!)

The shop had lots of really cool things- large pumpkin-shaped ceramic jars, little facades of Portuguese homes, realistic pomfret and mackerel… Take a look at some of these pics and you’ll get a good idea- 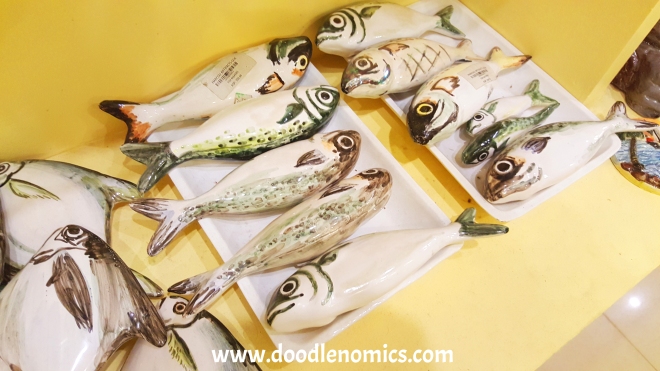 We visited the Basilica of Bom Jesus or Borea Jezuchi Bajilika which is a UNESCO World Heritage Site located in Old Goa (the capital of Goa in the days of Portuguese rule). The basilica holds the mortal remains of St. Francis Xavier, as explained by our overly enthusiastic tour guide Prakash. He said a lot more but it was difficult to fully grasp. I spent quite some time outside the basilica, sketching it- the real struggle was protecting my sketchbook from the rain. The weather in Panaji was unpredictable, it would randomly begin raining and the next moment, turn sunny.

We tried out a few restaurants in Goa- Desbue (where the person serving us food insisted we try the ‘fried fish’ which was in fact Calamari. I thought he might be talking of a new addition to the menu, maybe they had a special fried fish, something like catch of the day but no, he was selling us Calamari as fried fish because squid wouldn’t sound very appetizing. Didn’t appreciate the misleading bit there- why was he so desperate to feed us squid? I don’t know. We did order it though and it was just alright. Nothing great), Mosaic, Down The Road River Front, etc.

Sadly, some places we had wanted to eat at in North Goa were closed as it was off-season. September onward, beach shacks and water sports begin and is considered tourist season. 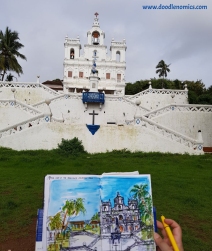 We also visited the colonial Portuguese Baroque style church, Our Lady of the Immaculate Conception, also called Panaji church and Fort Aguada (below).

Almost every street has a shop selling cashew nuts. Marcou artifacts has bowls, trays and plates shaped like the nut (along with the cashew apple/ fruit).

In most markets, you will find vast collections of junk jewelry, never-ending rows of huge medallions and beads. There are night markets you might be interested in visiting at Anjuna which is also the most popular.

Our Goa trip was fun- I haven’t posted all my sketches here because I have some gluing and photo-pasting left to do on some pages. Once it’s done, I shall post. There’s more to explore and that’s a good thing, so you always have something to look forward to on your next trip. Hope you enjoyed flipping through my sketches as much as I did making them!

Be sure to check ‘Doodlenomics’ out on Facebook and Instagram for more sketch-related travel and food stories! Oh, and do leave comments if you like, I’d love to hear from you! 🙂